The 50+ consumer is not to be overlooked—and neither are their moviegoing habits.

People over the age of 50 are the current drivers of economic value in the United States. Making up 35% of the population, the collective consumer power of this generational group is responsible for over 7.6 trillion in annual economic activity (roughly 42% of total US GDP), and they hold 83% of all household wealth in the United States. In addition, life expectancy expanded in the 20th century and drastically lengthened what we consider middle age by 30 years–and those thirty years are being put to good use. 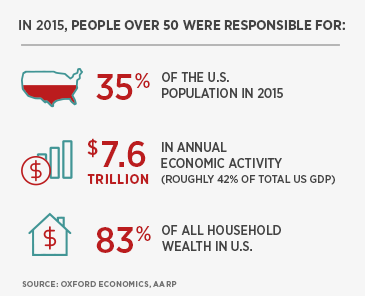 So what does this have to do with the movies? The 50+ consumer is also uniquely positioned to enjoy moviegoing, and in ways that are particularly beneficial to the box office. Their stage of life includes more free time (due to either retirement or earned career flexibility), higher discretionary income, and the ability to continue to be active in ways that are relatively new to our culture’s conception of aging. These lifestyle elements make them unique in their behavior as moviegoers.

While the Millennial consumer receives the lion’s share of credit for all experiential spending, the 50+ group is spending their money on many of the same things Millennials have been shown to hold dear: travel, leisure, entertainment, and new experiences.

As we covered in our previous article Millennials: Shaping a New Economy of Experience, the Millennial focus on acquiring experiences rather than goods has made moviegoing a natural fit for them.

The same can be concluded about the 50+ group, who according to the most recent Motion Picture Association of America (MPAA) Theatrical Market Statistics Report, were responsible for 25% of all movie tickets sold in the United States in 2016. In addition, 26% of moviegoers in this age group are frequent moviegoers, meaning they attend at least one movie a month.

The evolution of the moviegoing experience has created significant draw for this age group as well. Many of today’s movie audiences are able to enjoy expanded food and beverage concepts including in-theatre dining, a greater variety of concessions, and alcoholic beverages at their seats. When combined with luxury recliners and state of the art sound and screen technology, moviegoing is catering to a definitively adult audience.

While both the 50+ group and their Millennial counterparts make going to the movies a part of their entertainment diet, the way they attend movies differs. The 50+ moviegoer provides dynamic incremental box office by filling in when Millennials attend less often: weekdays, daytime showings, and later in a movie’s run. In addition, the 50+ segment supports mid-budget movies at a significantly higher rate.

This makes the 50+ moviegoer an important contributor to overall box office health. Research shows that the 50+ group is bolstering blockbusters (tentpoles), significantly contributing to the box office return on mid-budget films, and somewhat surprisingly responsible for the success of drama, art house, and independent films which operate outside of the blockbuster system but can significantly impact box office. In addition, films that have acknowledged this age group through content and casting have seen impressive ROI on production versus box office performance.

While the 50+ moviegoer rewards content that is aimed toward our traditional understanding of this particular stage of life (movies featuring 50+ characters and storylines), they are apparently just as interested in the content that attracts their younger peers as well. 27% of the Star Wars Episode VII audience was 50+, and perhaps more surprisingly, 36% of the audience for the movie Trainwreck was 50+, according to Movio’s recent report on this topic.

The Oxford Economics comprehensive report on the Longevity Economy explains that this population is diverse, “comprising people from all regions, races, professions and pursuits, united only by their age. Collectively, they are very active in the workplace— staying employed for longer, earning wages, spending more money, generating tax revenue, and producing economic value for an extended period of time. They are also critical in driving entrepreneurship and investment, and as enthusiastic consumers of leisure activities.” This characterization runs counter to the storyline that has cast the 50+ population as a societal burden waiting to happen rather than an opportunity for social innovation and economic health.

While the importance of serving the Millennial population has been established, acknowledging the economically vital 50+ consumer can be equally rewarding, and perhaps more immediately when considering their collective sizable discretionary income.

Those who comprise the Longevity Economy are our country’s most active consumer spenders, spending more overall than their under 50 counterparts and accounting for a majority of the spending in multiple categories. The Millennial influence on market demand has become a clear focus for all industries, but as the group with the largest consumer power today, it is just as vital to better understand the experiential spending of the Longevity Economy.

AARP and Movio. (March 2017). The 50+ Moviegoer: An Industry Segment That Should Not Be Ignored. Retrieved at http://www.aarp.org/research/topics/life/info-2017/the-50plus-moviegoer.html

AARP and Oxford Economics. (September 2016). The Longevity Economy: How People Over 50 Are Driving Economic and Social Value in the US. Retrieved at https://www.oxfordeconomics.com/recent-releases/the-longevity-economy